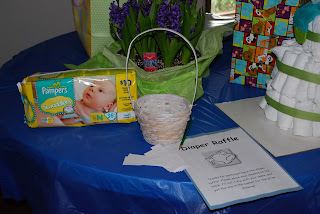 I attended a baby shower once that included a special prize raffle for those who brought a pack of diapers or wipes to the party.  I thought this was a brilliant idea! (And who doesn't like the chance to win something?!)  When I planned my sister-in-law's shower, I decided to incorporate the surprise diaper blessing at her shower.  You can see the prize sitting behind the starter pack: a beautiful bouquet of live hyacinths! As each guest arrived with their gift, if they also had a pack of diapers or wipes, they filled out a slip to put in the basket.  And the mom-to-be went home with a slew of diapers!