Its been my husband's dream for years to see a moonbow.  Apparently, the only places you can see a moonbow (defined as a rainbow in the light of the moon) are Cumberland Falls near Corbin, Kentucky and Victoria Falls near the border of Zambia and Zimbabwe.  We chose Kentucky.  Its much closer than Africa. You have to view it within 2 days of a full moon. 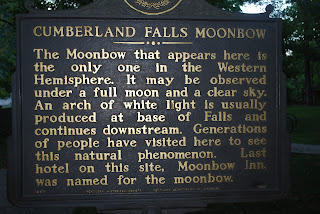 We arrived to Corbin about 6pm, quickly checked in to our hotel (a Hampton Inn...yummy free cookies) and then started the drive into the park.  We weren't sure how accessable the falls were.  The answer is: very accessable.  We parked in a spacious parking lot, walked down the sidewalk past the visitor's center and gift shop, and then down the sidewalk to the moonbow viewing location.  Once we got close to the falls, we were able to walk out on a flat (as in grade) but bumpy rock formation to get a better view.  It had a cable fence to keep anyone from venturing too close to the water, but it was just cable. (As in, the toddler stayed in the back carrier the whole time). 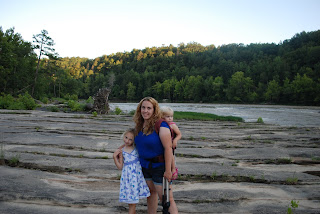 My husband set up the camera and tripod and waited.  The rest of us visited the Visitor Center, which was quite educational.  It had samples of many different native trees and a case with dozens of arrowheads and their approximate time period. Some were even BC! There were displays of native wildlife and descriptions of several endangered native species. 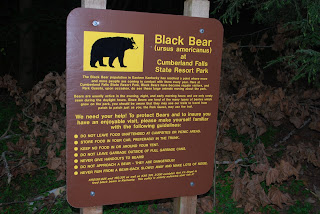 About 10:30 PM (the toddler was fast asleep in the back carrier) it was Moonbow time.  The moon finally reached above the trees and was shining on the spray from the waterfall...and there was a moonbow.  We stayed and snapped photos about 15 minutes.  (By snapping, I mean super long exposure because it was night time).  Also by this time there was quite a crowd.  They were very happy to fill in our spot when we left.

Saturday morning we ate the yummy hotel breakfast and returned to the falls.  My husband had considered white water rafting with the 6-year-old, but later decided she wasn't quite ready for that.  Instead, we chose a Rainbow Mist boat ride.  This was provided by Sheltowee Trace Outfitters who have a pavilion right inside the park. The raft ride takes you right up to the base of the falls...thus the mist.  When we went, the price was $12 for people 13 and up, $10 for kids 6-12, and $7 for kids 5 and under (but over 25 pounds).  We were very fortunate to be the only people on our raft.  This could be because there was a thunderstorm an hour before our ride. Our tour guide was super...but I can't remember his name, just that it had 5 letters and was tattooed on his back. 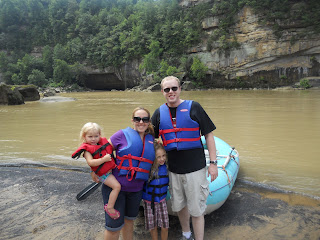 After the raft ride we headed up to the horse stables on park property.  Here, the 6 year old and I rode our very first horse ride!  She was on a lead.  I was not.  The first 10 minutes or so of the guided ride was very relaxing.  Then, my horse realized I didn't know what I was doing and became as ornery as a toddler.  He kept stopping for snacks and twice tried to go off on his own trail instead of staying with the group.  I tried my best to steer him.  It was still fun, but I learned that horses have quite the personality. Cost was $18 a person. 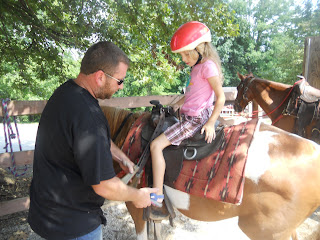 That evening we went for a quick swim and enjoyed David's Steak House & Buffet.  Everyone was SUPER friendly.  The manager even stopped by our table to chat for several minutes.  The food was good, too.  I discovered I really like corn bread salad.

Sunday morning after church we visited KFC in Corbin.  But it wasn't just any KFC...It was the site of Sanders' Cafe.  This was where Colonel Sanders first sold his fried chicken before going on the road selling his special seasonings nationwide. There was a little museum inside too.  Again, everyone here was SUPER nice.  I remarked about how I'd never seen chicken livers and was curious to try them, but didn't want a whole meal.  So, the employee was kind enough to throw in a couple for free so I could try.  My reaction:  the coating was good... but not a fan of the liver.  Now I can add that to my list of odd foods I've tried (ox tail, fish eyes...etc). 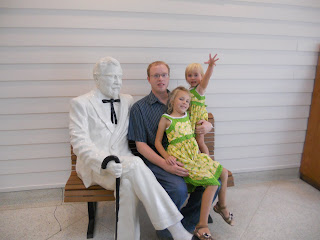 We spent some more time by the pool this day and ordered pizza for dinner (Snappy Tomato Pizza). Then, we got ready to depart in the morning...Next stop, Gatlinburg, Tennessee!
Posted by Rebecca L at 7:21 AM