How to Make an Angry Birds Cake

My youngest somehow fell in love with Angry Birds (or as she said, "Ah Boo") during her second year.  So, when it came time to choose a cake for her birthday, we decided that Angry Birds was the thing to do. We had about 18 family members attending her party, so we opted to make two cakes.  The first, the large red one, was made with a Wilton Ball pan. The box has pictures of a soccer or basketball on it.  We simple baked the ball in the two pan halves, leveled the top so they would meet up and assembled them.  We used the extra cake pieces to make the raised top of his head.  My husband then star-tipped the entire red area, and used pink for the belly. The orange nose is made with Starburst candy.  Simply melt the candy in the microwave for a couple seconds so its pliable. 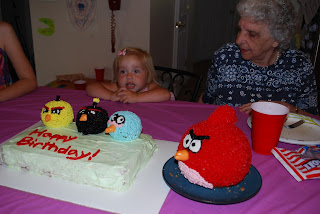 The other cake was made with a simple sheet cake and 3 of Wilton's Mini Ball pans.  Smaller amounts of Starburst candy was used for these noses, too.  The black tips of these birds are licorice pieces. 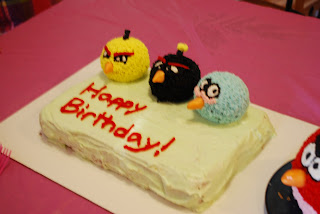 Do you think she liked her 2nd Birthday cake? 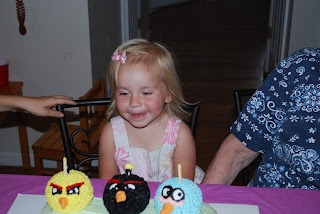 The cake recipes used for these cakes was a Butter Cake from all recipes for the balls and this healthy chocolate cake recipe for the sheet. As a rule, we make all our own frosting, but we still buy black and red as its so difficult to make with coloring.
Posted by Rebecca L at 11:34 AM