How to Pick and Slice Your Own Pineapple 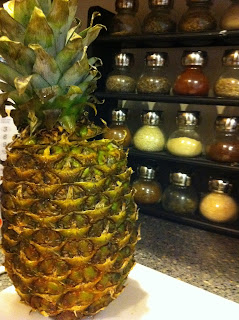 For me, pineapple mostly comes from a can. Occasionally I'd find it at the grocer freshly cut, but mostly it came to us canned. My girls LOVE pineapple. In our home, we try to avoid chemicals like BPA and it just never occurred to me it was leeching into the canned pineapple. I thought about buying one of those fancy pineapple corer/slicer things, but a friend of mine recently challenged me to just try it with a knife!
You can kind of see in the photo I had already taken the first step: cut off the pretty pineapple "hair." Next you cut off the bottom. I used a chef's knife for all the cutting. I also washed the pineapple before starting and after I had removed the skin. 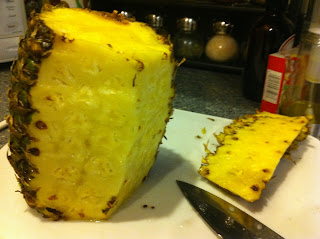 After you remove the top and bottom, start on the sides, trying to stay as close to the skin as possible so you don't lose very much pinapple-y goodness.  After this, I thought for a minute I was done and could easily chop it, but I was wrong.  There's a cylindrical core of rough pineapple about an inch in diameter.  Slice around that, and then chop up.  It really is quite YUMMY!  Definitely beats the canned stuff.  I also think its cheaper this way!

Also, I asked the produce person how to pick a pineapple.  If you want to eat it right away, you want one that is brown like mine.  The ones that are greener look prettier, but they are not ready to eat.  The riper the fruit is, the softer it will be.